The force that through the green fuse drives the flower: Molecule(s) of the Month June 2015

I have always enjoyed poetry since I was at school, and it was there that I was introduced to Dylan Thomas. And he came to mind again while I was browsing the contents of the journal Science recently, where I noticed a report on the structure of the photosynthetic complex from the pea plant, Pisum sativum (can you think of a major scientific concept that was established with peas?). I immediately thought of the first line of his splendid poem:


"The force that through the green fuse drives the flower"

Why? Ever since I was introduced to the biochemistry of photosynthesis at University (and similarly with oxidative phosphorylation), there was always something mysterious to me, about the mismatch between light and chemical energy. The catabolism of glucose seemed much more straight forward than a process in which photons are captured and used to orchestrate the excitation of electrons associated with chlorophyll. So Dylan Thomas's use of language: "force", "green", "fuse", "drives" and ultimately "flower", seem to capture many aspects of this fascinating challenge for Science: explaining how sunlight energy in the form of photons, "feed" the green plants and produces the flowers that delight us and seduce winged insects. Oh and not forgetting the "fixing" of atmospheric carbon dioxide with the associated release of oxygen. All of which make life on earth possible for you and me! 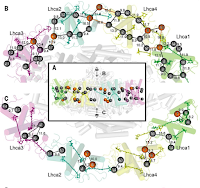 The structure of Photosystem I (PSI), has just been determined from peas, by Qin et al (see RHS for the arrangement of proteins and the pigments) and helps us better understand one of Nature's most impressive physical achievements.  However, before we get on to PSI, there are two photosystems in Nature, and both are required to capture capture photons and liberate oxygen. Photosystem II (PSII) captures photons and these in turn excite the electrons in its chlorophylls. These electrons are then "grabbed" by a primary electron acceptor, and a process akin to "pass the parcel" begins. The electron deficit is replenished by Mn2+ ions stripping an electron from water and the transfer of electrons to PSI then takes place via a set of cytochromes. Pass the parcel can occur, because the electrons are passed along a chain which is like a staircase: photoexcited electrons travel through the cytochromes to PSI, which in plants, sits in the thylakoid membrane (see below left). And before you ask, no the thylakoids are not from Dr. Who! Although.....

This energy drop is harnessed by a process we call chemiosmosis,  to transport protons through the membrane, to the lumen, to provide the energy (in the form of what is called a proton-motive force) to generate ATP. I sometimes liken these processes to hydro-electric power, which I think captures the essence of the energy level drop. I hope you have now worked out that the structure of PSI and II must be perfectly in tune with the steps in electron transfer: both geometrically and dynamically: at the heart of this phenomenon are pigment molecules including chlorophyll, together with proteins that cooperate with the collection of pigments in order to capture the photons and direct them to excite pigment electrons, as a first step towards the production of NADPH. (Recall the role of NADH and FADH in oxidative phosphorylation). I strongly recommend you click on Dr. Mike Jones's web site to learn more about the origins of photosystems.

Let me now turn briefly to the Physics and Chemistry associated with the Biology of Photosynthesis.  It is over 100 years ago that Max Planck produced his now famous equation, relating the energy of a process to the velocity (v) and wavelength ( λ )of light. :

suggests that this is achieved through a remarkable three-dimensional array of pigments, which absorb most of the available light by a fine tuning of over one hundred pigment molecules by the Light Harvesting Proteins. The image above shows the pigments in a 3 dimensional representation taken from the paper, and the electronic properties of each molecule are modified by the "organising" proteins. By learning how Nature achieves this amazing fete, we can hopefully improve our own solar energy devices, as part of our programme to find alternatives to fossil fuels. However, ending as I began with a poem, the 20th Century American poet, Vachel Lindsay captured the pervasive nature of solar energy as follows:


The sun gives not directly
The coal, the diamond crown;
Not in a special basket
Are these from Heaven let down.

The sun gives not directly
The plough, man's iron friend;
Not by a path or stairway
Do tools from Heaven descend.

Yet sunshine fashions all things
That cut or burn or fly;
And corn that seems upon the earth
Is made in the hot sky.

The gravel of the roadbed,
The metal of the gun,
The engine of the airship
Trace somehow from the sun.

And so your soul, my lady—
(Mere sunshine, nothing more)—
Prepares me the contraptions
I work with or adore.

Within me cornfields rustle,
Niagaras roar their way,
Vast thunderstorms and rainbows
Are in my thought to-day.

And freedom's bells are ringing,
And bird-choirs chant and fly—
The whole world works in me to-day
And all the shining sky,

Because of one small lady
Whose smile is my chief sun.
She gives not any gift to me
Yet all gifts, giving one. . . .