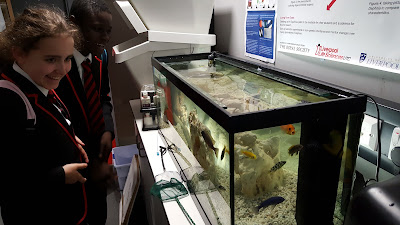 On Wednesday the 11th of May, Myself and a team of teachers and students (from year 10 - 12 ) from Liverpool Life Sciences UTC went to The Aquarium Liverpool, a shop in our local area  for the afternoon to carefully pick out a number of a different tropical fish that are a range of species and colours. We picked the fish by their natural habitat, as we had set up two types of environments  for two different tanks. The first tank was focused around the African lakes (mainly Malawi) which contain few plants (if any at all), sandy/pebbly lake floor with big boulder rocks for the fish to hide and protect themselves from predators such as birds of prey. Our african lake tank has a pH slightly above neutral (due to the rocks) to represent the pH of the lakes in natural habitat . The second tank theme was Amazonian and these rivers have a lower pH (due to the decaying wood and green plants) to also represent their natural habitat.
After myself and the team had spent the afternoon at the aquarium carefully picking out the fish and deciding on certain names for the fish, we headed back to school to introduce the fish to their new home. Before releasing them from the bags they were transported we allowed them to acclimatize in the bags so that the temperature could even out between the tank and the bag. Putting the fish straight into a new environment can be very stressful for the fish as well as possibly the fish going into shock that could kill them. We slowly introduced them by letting them float on the top of the water in their bags for about 5-10 minutes then slowly allow a small amount of water every 5 minutes to fill the bags allowing the fish to acclimatize to their new environment. Finally we released them into the tanks. 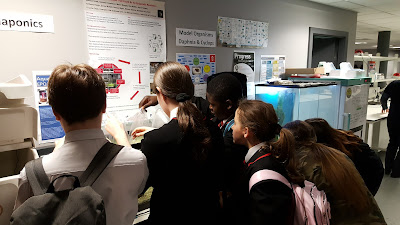 We got these tanks for a few reasons, firstly as a Life Science school we thought the tanks are a good way of introducing students to the different adaptations and behaviours of organisms from different ecosystems. Secondly when owning any type of aquatic tank water checks are crucial to keep the plants and fish healthy, so by doing regular water checks and water changes it teaches us new skills by analysing nutrient levels using chemical test kits, learning which levels are healthy or unhealthy for the fish and how to improve the tank. Thirdly we often have primary school children joining us down in the innovation labs for the afternoon that find it great fun to interact with the fish along with other aquatic model organisms as well as being taught by observing them and learning all about them for example how to care for fish by analysing their water quality and study their behaviour.

We have a range of fish in our two tanks. For example in the Amazon tank we have: Bolivian rams,  they are often described of having the behaviour of being very peaceful and described as being very hardy (meaning it's easy to look after them in aquatic tank environment) but have to be kept at a temperature of 23.3 - 25.6oC. They are found in streams,pools and lagoons and feed on small organisms but every fish in our tank get fed tropical flake food that give them all the nutrients they need to stay healthy. We also have angel fish which are described of having the behaviour traits of being semi- aggressive and are also moderately hardy fish that have to be kept at 23.9 - 27.8oC degrees. In their  natural habitat they are found in swamps or flooded areas that contain their feeding source of small model organisms such as smaller fish and invertebrates. Marbled  hatchetfish behaviour is said to be peaceful but shy  but are moderately hardy that has to be kept at 23.9 - 27.8oC. Thier habitat are throughout the amazon river as they are a very common fish in the Amazon river environment. Lastly we have two types of species tetra,the cardinal tetra and the black neon tetra both described as  peaceful and very hardy that feed on fallen decaying plants and small invertebrates. 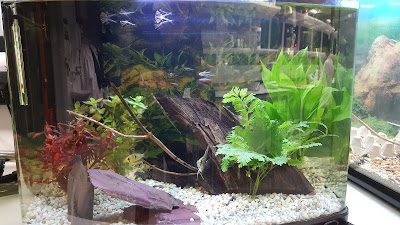 In our African tank we only have two different species but will be shortly adding to their community. At the moment we have a variety of Lake Malawi Cichlids that are mainly found in Lake Malawi in Africa. They are recommended as a starter fish for tropical tanks as they are very hardy, have a great personality of being very active and lively but are very dominant, there is always one main leader in each tank. These Malawi Cichlids often come in bright and natural colours that can add a burst of colour into the tank which can be fun for any fish owner. As these fish are found from Africa the water has to be kept at a high temperature of 26-27oC, in their natural habitat they feed on smaller aquatic organisms. Particularly striking are the two Peacock Cichlids. 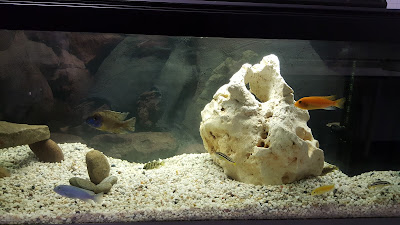 As any type of aquatic model organism they all need care, some more than others.  For these fish we feed them and take the temperature of each tank every day and record the results on a chart to prevent over or under feeding and maintain good water conditions. We also test the tanks water twice a week and record the results down to keep on eye on the pH, nitrate, nitrite and ammonia in the water as if the levels rise high there is a risk of the fish dying. Finally we do weekly water changes of 25% of each tank to refill the tank with clean water to reduce the risk of rising levels of nitrate, nitrite and ammonia in the water. Once a month we do a larger water change to clean the tank more thoroughly.

In the future our aim is to increase the range of tanks we have to include a number of different habitats. These tanks are proving a great way of engaging our students and were a huge hit with the primary school students. We hope these tanks will allow students to take part in a variety of projects which educate them and inspire them to find out more about workings of organisms and Biological Systems.

By Y12 Student, Lauren Scott (Manager of aquatic organisms for Greenland BioDesign)
Posted by Unknown at 15:47 No comments:

Cysteine for June and Half Term. Molecule of the Month