Molecule of the Month February 2016: Captopril

One of the most fascinating things about my sabbatical leave at the Liverpool School of Tropical Medicine a few years ago, was visiting the Hepetarium, which houses the Alastair Reed Snake Venom Research Unit headed up by Rob Harrison. The power of research into toxins, which has played a major role in the history of Biochemistry, Physiology and Medicine, in my view is often undervalued. But not in respect of the molecule of this month, captopril, the molecule that was introduced by the drug company Bristol Myers Squibb (then ER Squibb) as the first ACE inhibitor for the relief of hypertension.

The structure of captopril is shown on the right, and it is know to act on angiotensin converting enzyme (ACE). The development of captopril, is a lovely example of how natural products can inform drug discovery. It is a result of a combination of Biological serendipity and incisive Chemistry. The original molecules associated with blood pressure modulation, extracted from venom, where too complex to be viable therapeutically. However, by first establishing the key role of the proline moiety in active site inhibition, the next phase was aimed at simplifying the peptidyl arm of the molecule.

The natural products associated with blood pressure modulating activity were peptides of the bradykinin family (brady-slow, kinin-movement related), including the nonapeptide, teprotide (LHS). As you can see from the final form of the drug, the enzyme anchor can be dramatically simplified, making the drug a real economic option. [As opposed to a synthetic nightmare!]. The systematic evaluation of variations on the natural product (structure-activity-relationships) led to captopril, as the first drug of this class.

The simple active site inhibition model is shown schematically below. However, in order to address the many early reports of severe side effects, further refinement has led to a new generation of ACE inhibitors that include enalapril. There is a freely available summary of current ACE inhibitors here. The captopril story is an excellent example of how medicinal chemistry developed in the 1970s in particular. It was followed by approaches based on screening large automated libraries of compounds in a methodology called combinatorial chemistry. I note with interest and enthusiasm, the resurgence of Natural Product chemistry in the areas of antibiotics and anti-malarial drugs, and direct you to a nice review of this "renaissance" by Tadesz Molinski, which is free to download here.
Posted by dvdhrnby at 13:42 1 comment:

Y13 Student Project Update: The Topography of the Skin

During a placement at Unlilever Research and Development in Port Sunlight,we used an optical surface microscope. This was used to analyse the ‘topography’ (smoothness) of the skin. This sparked enthusiasm to create a cost effective method to test the topography of peoples’ skin. We use Parafilm (a stretchy plastic) to take an impression of the person’s skin. Then this can be analysed under a light microscope and ImageJ used to create a 3D surface plot of the skin. 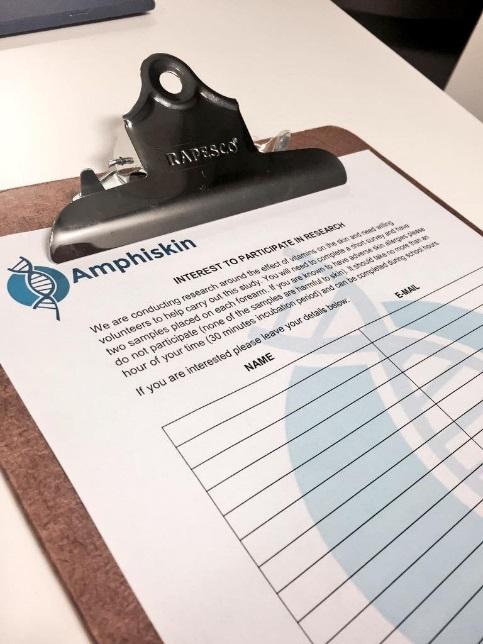 Our Extended Project Qualification is looking into whether vitamins actually improve the topography of the skin. For example, often vitamins are included in anti-ageing and hand creams, however we are testing whether this is just a placebo effect. 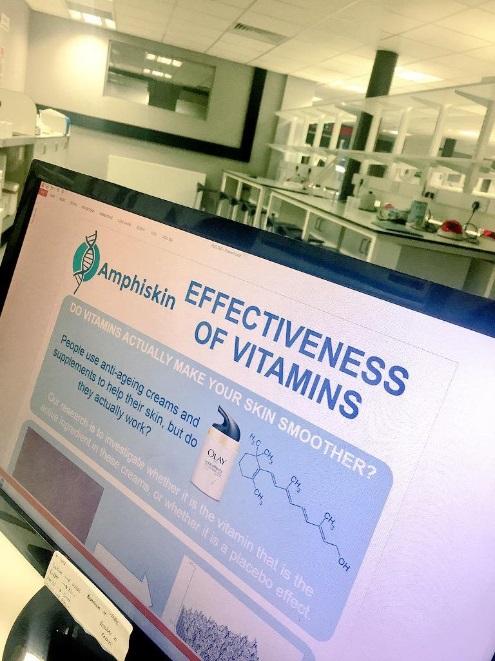 We will also analyse the consumer science psychology behind whether people think the arm the vitamin was placed on actually induced a feeling that that arm was smoother.
We predict the vitamin will score higher on a satisfaction scale compared to the control substance also the vitamin will show a smoother surface plot compared to the control substance. This will determine whether vitamin is effective as a dermatological ingredient for improving the quality of a participant’s skin.
Posted by Unknown at 15:35 2 comments:

The Daphnia group trip to the Royal Society Partnership Conference 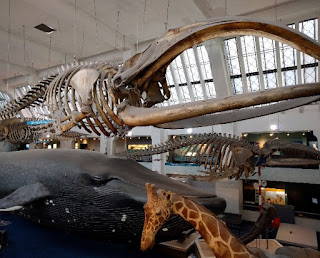 We left our school at 9:45AM. This was followed by a 15 minute bus drive to Liverpool Lime Street where we patiently waited for our train to Euston Station to arrive. We boarded the train at 10:45 AM where we took our seats and awaited our departure.  The train journey took 2 hours, meaning that we arrived in London at around 1PM. We eventually found our underground platform that would take us to the Natural History Museum. As we reached the top of the stairs we were immediately greeted by a large, Victorian building which towered over the structures surrounding it. This was the Natural History Museum. 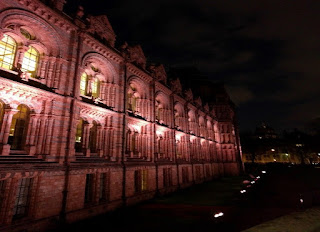 As we strolled through the main gates, myself and the rest of our group were overwhelmed by the prehistoric edifice. As we walked through the building’s wooden double doors, a large Diplodocus skeleton branched across the entire room. Over our 3-hour stay at the Museum we observed unique rocks and minerals such as amethyst and emerald, followed by rocks from both Mars and the Moon. We then ventured to the fossils exhibit where we were fascinated by shells and skeletons that had ages of up to 170,000,000 years old. This room consisted of objects such as prehistoric dinosaur fossils to a skeleton of an extinct Dodo Bird. After this we visited the rooms dedicated to Mammals. This consisted of small rodents such as raccoons to massive creatures such as Tigers and Blue Whales. We even had the chance to take a picture with renowned Scientist Charles Darwin. Unfortunately, the Dinosaur exhibit was closed due to reconstruction but we enjoyed our trip none the less.

As soon as we left the museum we were back on the tube, searching for our overnight stay at Elephant and Castle. Our crowded train journey eventually ended and the group was back on the streets of London. After a ten minute walk we had arrived at our hostel. We dumped our bags in our rooms and swiftly headed down to get our dinner. After this, we headed back to our rooms where we went to sleep in preparation for the Royal Society conference the next day. 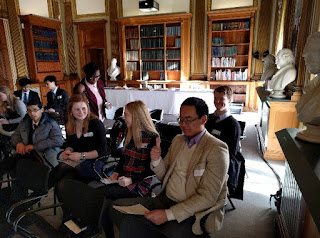 We woke up at precisely 7AM in order to be packed and ready to go by 8AM. After a quick breakfast, we were back on the road, heading for the Royal Society Conference. After a long, compact train journey, the group arrived at Green Park Station, a walking distance from the Conference. Minutes from the Royal Society building, we had a perfect view of Buckingham Palace which mesmerized those who had never visited the Big Smoke before. 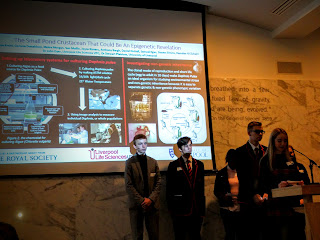 As the group entered the Royal society building we were astonished by the beauty and level of detail that went into creating this structure. A glistening chandelier hung over our heads and meticulous portraits of previous or current fellows of the Society where pinned to the walls surrounding us. People such as Professor Stephen Hawking who is alive today and others such as Robert Hooke (the first man to have a scientific journal published in 1665) are just a handful of names of those who were on those walls.We took our seats in the main dining room where we were introduced to the Royal society by the President of the organization, Venkatraman Ramakrishnan, along with 4 other fellows. After the hour-long session we went on to take part in 2 lectures. One of these lectures explained the history of the scientific journal and how the organization has evolved from having 1 journal is 1665 to over 22000 now. The 2nd lecture explained some of the once in a lifetime opportunities available when you have links to the Royal Society. It talked about how a number of people had the chance to visit the Amazon Jungle in Peru in order to collect scientific information on animals living there. After a 45 minute lunch break the presentations began. Other school projects ranged from investigating cosmic rays to building robots. Our thoughts and feelings before the presentation were a mix of excitement and nerves, however we overcame our fears and delivered the speech exactly as planned. After everyone had delivered their speeches we spent an hour explaining our project and finding out more about other schools’ plans during a poster session. 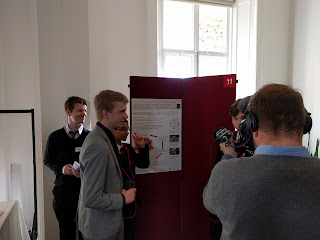 After this we left the Royal Society building, grateful that the World-renowned association gave us the opportunity to visit their headquarters. We went on to take a quick walk down the road to visit both Downing Street and Buckingham Palace. We had the chance to take pictures in front of the Queen’s home and watch the Royal Guards Change shifts. We then meandered to Green Park station where we boarded the tube to return to Euston Station where our train back to Liverpool would leave in 2 hours at 18:40PM. Our group got a quick bite to eat before we headed to our platform where awaited our train’s arrival. The train took us back to Liverpool Lime Street by 21:00PM. We said goodbye to one another. It was the end of an incredible trip. 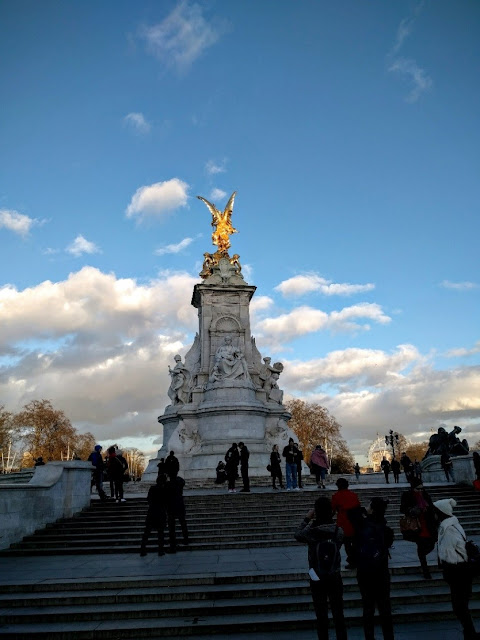